by rlstanley
Lymies, do not try this at home. Or anywhere, including, your 'holistic doctor's' office.

Marketeers, stick with your other enemas.

And no, slurping down high levels of salt will not remedy an eel enema.


(Late 2003, Hong Kong) An unidentified Hong Kong resident, age 50, entered the Accident and Emergency Department of a local hospital complaining of abdominal pain. The doctor's examination revealed peritonitis, an inflammation of the abdomen. Wondering what had caused this problem, doctors ordered an x-ray and spotted what appeared to be an eel inside his colon! Could an eel be the source of his pain?

Yes, the man admitted, there was an eel inside him. He had been suffering from constipation, he told the dubious medical staff, and thought that inserting an eel into his rectum would relieve it.

The man was rushed to the operating room, where an emergency laparoscopy disclosed that a 50-cm (19-inch) eel was biting the side of his colon. The eel also had also taken a bite out of his rectum wall in transit, so to speak. After surgeons removed the animal and reconstructed the rectum, the man's pain and constipation were both cured. He was discharged from the hospital a week later.

by LymeH
Oh, My! I wonder if you extracted the eels teeth first if that would help? Just kidding. No one should try using animals of any kind in the pursuit of regularity. Maybe if there wasn't so much * being passed around as knowlege, people wouldn't go to these extremes to get rid of it.

What an eelvil thing to try.

LH:
What an eelvil thing to try.

Yeah, there's the coffee and the MMS ones, "ozonated water" enemas. Whatever.

But here is another oddball that had some unintended consequences.

Again, kiddos, don't do this crap.


(Reuters) - Charges have been dropped against a Texas woman who was accused of giving her husband a sherry enema that killed him, the prosecutor in the case said on Wednesday.

Tammy Jean Warner had been scheduled to face trial for negligent homicide in the May 2004 death of Michael Warner, 58, but Brazoria County District Attorney Jeri Yenne said the charges were dismissed a month ago for lack of evidence.

The dead man had had "a severe alcohol issue" and it was not clear his wife had committed a crime, Yenne said in a telephone interview.

"Let's say I have lung cancer and I continue to smoke. If you provide cigarettes to me, is that negligent homicide?" Yenne said.

"I really wrestled with the consent issue and negligence issue. I didn't think it rose to the level of negligent homicide."

At the time of Warner's indictment in 2005, police told the Houston Chronicle the woman had given her husband two large bottles of sherry, which raised his blood alcohol level to 0.47 percent, or nearly six times the level considered legally drunk in Texas.

Warner admitted administering the enema but denied she caused the death of her husband, who was a machine-shop operator. The incident occurred at their home in Lake Jackson, near Houston.

She told the newspaper her husband was addicted to enemas and often used alcohol in that manner. Police said Warner had a throat ailment that left him unable to drink the sherry.

Warner could not be reached for comment on Wednesday.

Yenne said a charge that Warner had burned her husband's will a month before his death was also dropped.

"We were never able to verify there was a signed, executed document," she said.

by Martian
A man died after feeling eel...

A man has died after an eel that was inserted into his rectum gnawed away at his bowels, causing agonising injuries which were eventually fatal.

Doctors were mystified as to the cause, and obtained permission from his family to undertake an exploratory laparotomy. Cutting open his innards, they discovered a 50cm long Asian swamp eel lodged in his rectum.

Though dead, the eel had apparently already wrought havoc on his innards, biting its way through his intestines prior to dying. Internal bleeding and infection rapidly set in.

He was reported to have eaten a lot of eel the previous day, but otherwise doctors had no idea how the creature had got there. His condition quickly worsened.

He lingered for 10 days in intensive care but eventually succumbed to the injuries and sepsis.

The likely cause was eventually established - he had apparently been drinking with friends, and had passed out. His friends had decided it would be amusing to insert a live eel into his anus whilst he was comatose.

Police have reportedly begun an investigation.

by rlstanley
.
Bad eel. Don't even think about going there.

by rlstanley
Perhaps the following magazine will publish various eelvil studies that are LymeLand staples. Of course, this is not an Open access 'scholarly' publication, so be prepared for rejection, LymeLand "researchers'. 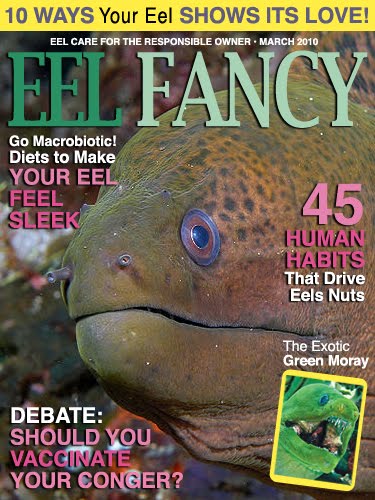 by Martian
That cover is hilarious.

Yeah, publications from LymeLand "researchers" would drive the eel nuts! The EELADS guidelines will never be accepted by such a respectable magazine.

by rlstanley
It IS difficult to get past the strict peer review of Eel Fancy. Please note that the following myths were sent for publication, but the rejected & dejected authors are now checking into some of those open access scholarly pubs.

•Wearing an eelskin garter cures cramps.
•Rubbing a wart with eels’ blood makes it go away.
•A live eel in a drink cures a person from drunkenness.
•Witches and sorcerers wearing eelskin jackets protects them from bullets.
•A cooked eel will become raw if left uneaten.
•A whole eel can be used to cure deafness.
•Eel fat will render fairies visible to humans
•EAting an eel heart gives you the power of prophecy
•Eating a whole eel will strike you dumb.

by Cobwebby
With so many different health benefits it won't be long before the eel becomes an endangered species.
Someone needs to tip PETA off on this emerging deelema.
All times are UTC+01:00
Page 1 of 2
Powered by phpBB® Forum Software © phpBB Limited
https://www.phpbb.com/