This page offers information about ticks and the role ticks play in Lyme disease. Ticks are the so-called vector (an organism that carries and transmits an infectious pathogen) of Lyme disease. Specifically the information and images are about the hard-bodied Ixodes ricinus tick, but most of it also applies to all other ticks of the genus Ixodes.

In Europe, the vector of Lyme disease is Ixodes ricinus (the sheep tick or castor bean tick). In Eastern Europe and Asia, including China and Japan, Ixodes persulcatus (the taiga tick) is probably the most important vector. In North America, Ixodes scapularis (the black-legged tick or deer tick) is the main vector on the east coast, while on the west coast the main vector is Ixodes pacificus (the western black-legged tick). Note: ticks can also carry and transmit other infections, like babesiosis, and tick-borne encephalitis (TBE).

Ticks are classified as arthropods (Arthropoda), a phylum (biological category) of invertebrates with legs with joints, a segmented body, and an exoskeleton. Within this phylum, ticks belong to the class of arachnids (Arachnida), a class that also includes spiders and mites, but not insects (Insecta).

How to recognize a tick?

At first glance, a tick looks like an insect, but ticks are not insects. There are some characteristic differences. A tick can be identified by the number of legs (note: adult ticks have eight, but a tick larva have only six), the number of body segments (parts) and the mouthparts that the tick inserts into the skin at the head of the tick. The three main differences between insects and ticks are: 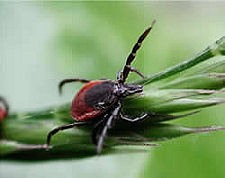 How many species of ticks are there?

Approximately 820 species of ticks have been identified worldwide. Of these, 100 are capable of transmitting pathogens such as bacteria, viruses and protozoa, and some tick even poisons, to humans. In Europe it is almost always Ixodes ricinus..

Life cycle of the tick 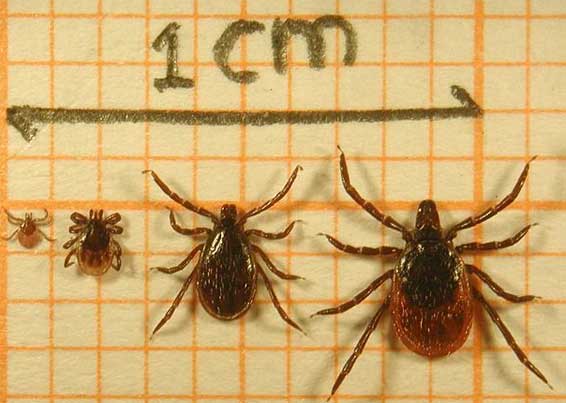 On the photo above you can see how tiny ticks are in larva and nymph stages! Even in the adult stage, ticks are only a few millimeters in size. Further you can see that the tick in the larva stadium has 6 legs, while the tick in nymph and adult stadiums has 8 legs.

A tick changes from one active stage to another active active stage by shedding their skin, which means that the tick casts its old outer skeleton and a new one develops that fits the new body structure of the tick. The molting takes place right after the tick has fed and usually takes a few days. The entire life cycle of a tick takes about two years, but may take up just one year or up to three years, depending on the availability of food. 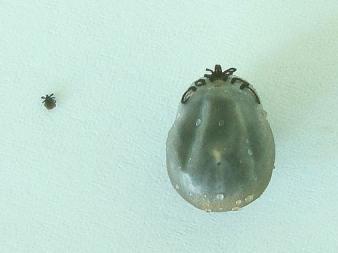 On the photo above you see on the left a tick in larva stage and on the right a fully engorged female tick. An enormous difference in size! Only female ticks grow that much in size when they take their last blood meal. After that they lay thousands of eggs.

As parasites ticks are dependent for their nutrition entirely on the blood and tissue fluid from a host, what can be a person, a pet or a wild animal, including mammals, birds and reptiles. Ticks are located in forests, dunes but also often in gardens. Ticks thrive in a moist environment and normally live in the vicinity of potential hosts.

Ticks climb in grasses, shrubs and undergrowth and wait until a host comes right along and then the tick grabs onto the host. They detect their potential host by the radiated body heat, carbon dioxide and possibly also by odors. A tick usually remains less than one meter above the ground and can not jump or fly. That a tick drops out of trees when a a host comes by, is probably a misconception.

Most ticks feed preferably not on people, but on deer, mice, squirrels, and birds. The larvae and nymphs often feed on small mammals, and adult ticks often on larger mammals. But, if a person happens to come along at the right time, it can also be seen as a suitable host.

The tick can climb up via the legs of a person and settles preferably in skin folds, but also just on a leg or arm. Besides the wild mammals, especially dogs, cats and humans are bitten.

The tick sucks up blood with a special mouthpart called a hypostome. This is a harpoon-like mouthpart with barbs that the tick inserts into the skin and with which the tick fixes itself. On both sides of the snout are the palps which protect the snout when it is not being used. 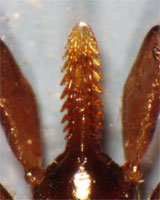 The saliva of the tick contains both a narcotic substance and a substance that counteracts blood clotting. Because of this a tick bite is often not noticed and the tick can settle itself imperceptibly. A tick can stay on the same host for a few days to as long as a week.

The problem with ticks is that they can be infected with the Lyme-bacterium and other pathogens. The percentage of infected ticks can vary a lot in different locations. For example in the Netherlands about a quarter of the ticks is infected with Borrelia burgdorferi, but the infection rate varies significantly throughout the country.

In some species the adult female tick can pass some of the pathogens to the eggs, so that the eggs and larva can already be infected. But most ticks become infected by feeding on blood of an infected host. Especially the nymph, that have already sucked blood one time and so are more likely to be infected, pose a significant risk for people. Since they are smaller than adult ticks, they are more easily overlooked.

The longer an infected tick is attached, the greater the chance of an infection. Therefore a tick has to be remove as soon as possible, but in a proper way. See tick removal for information and tips on the removal of ticks.